It is estimated in every classroom across Birmingham around three children have a diagnosable mental health condition. This needs to change. Childhood is a crucial time for establishing good mental health as international data shows fifty percent of all mental health concerns start before the age of 14.

The University of Birmingham, Birmingham Children’s Hospital and HSBC UK have joined forces in a unique city partnership to take action on childhood bullying, a preventable root cause of mental ill health. 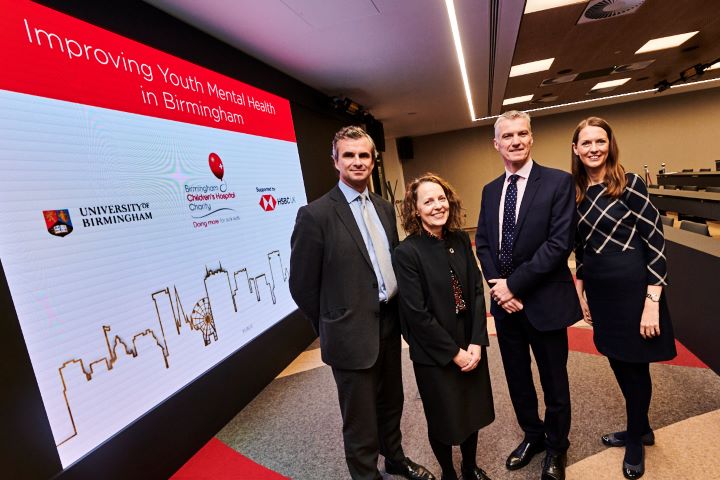 The partnership will pilot KiVa, a Finnish evidence-based whole school programme which has been successful in schools internationally but hasn’t been trialled in England. It equips children and young people with the tools to support each other, shifting the focus away from the bullying behaviour and giving them the skills to change the experience.

The pilot will begin in four schools in Northfield, Bournville and Selly Oak. If successful it is hoped that the scheme can be rolled out to a further 30 schools in Birmingham reaching over 8,000 children in the first stage.

'The impact of bullying on a child or young person is profound and although the warning signs are there at the time, no-one really knows the longer-term consequences. Our fantastic new partnership is a chance to change the life-story of thousands of children and young people in Birmingham and beyond and we are so excited about the potential opportunities ahead,' says Sarah-Jane Marsh (MA Russian and European Studies, 2000; PGDip Healthcare Management, 2002; MSc Healthcare Management, 2005; LLD 2017), Chief Executive at Birmingham Women’s and Children’s NHS Foundation Trust.

Thanks to the generous support and vision of HSBC UK as a founding donor, the partnership will explore the links to understand the relationship between predictors and incidents of bullying in Birmingham and will trial the innovative intervention scheme.

Zaynab, a member of the Youth Advisory Board for the Institute of Mental Health at the University says: 'This partnership is incredibly important because research into bullying and mental health can help other young people like myself and stop them from getting to the point that I did. Research like this will help with early intervention and will help create evidence-based practice to inform decisions around mental health care. There is definitely an urgent need for improved mental health care and I believe that research like this is the answer.'

Matthew Broome, Director for the Institute of Mental Health at the University of Birmingham says: 'Our long term goals are to reduce rates of bullying and in turn the negative outcome including the onset of mental health problems improving wellbeing more generally and adult relationships when children leave schools and transition into their adult lives. The pilot is set to conclude in autumn 2020 and the findings and next steps for the research will be shared later in the year.'

How to spot if a child is being bullied

Recognising the signs of childhood bullying:

If you are affected or are concerned about someone who has experienced childhood bullying, please visit the website links below for information on advice and support available.

Youth mental health is a key programme area for the Birmingham In Action campaign. If you want to find out more about the work of Matthew and his team and how you can get involved please contact our Development team.