Dr Ian Smith (MBChB Medicine, 1982) turned an early career in football into decades of helping his community as a local doctor. He recalls his time at Birmingham; both the University and the football club.

'I grew up loving a kickabout, and was delighted to be approached by Glasgow Rangers age 20. As I didn't want to give up studying science, they introduced me to the top amateur club in Scotland's second division, where I could do both.

'From there I went to Leicester City and Derby County, where Birmingham City (then in the semi-finals of the FA Cup) kept a close eye on me. Just before the transfer window closed, they met me at Birmingham Airport with a contract. It was such a thrill to play professionally alongside players like Trevor Francis, the first million-pound footballer in the English first division.

'As good as I was, the move to Birmingham City was a huge step up and I could not see myself playing into my thirties. My other love, medicine, was calling to me again.'

Interviewing for the Medical School

'In my interview for Birmingham's medical course, five professors posed some staggering questions; everything from identifying the nerve supply to the muscles around the ribs, to what ball we used in football.

'I came out convinced there was no way I was going to be accepted for medicine, but later found out they were so impressed they were simply having some fun! They later joked that I was the most articulate professional footballer they had ever met.

'Medicine takes five years of study; it is a real marathon. I was lucky that I had savings from my football career that enabled me to travel back to play for Hearts in Scotland on Saturdays for a while, but when exams and clinical work ramped up, I realised I couldn't keep both balls in the air at the same time.' 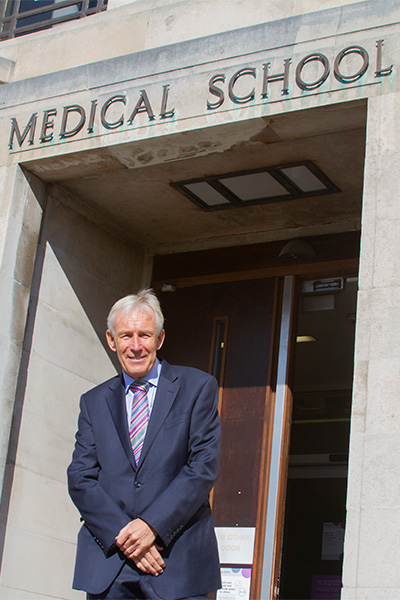 'After you qualify as a doctor, you need to get experience working in different specialties. I did six months each in medicine, surgery and paediatrics, but I couldn't find a position in the UK for obstetrics and gynaecology. A friend told me to get myself to Barbados, as he knew Bridgetown Hospital needed someone there. I realised very quickly that I wanted to spend more time there and I learned so much so quickly. By the end of my first year, I had delivered 30 babies by caesarean section.

'I returned to the UK via Australia and then my career took off; it has meant so much over three decades to help people. Today I'm helping make new medical breakthroughs by supporting research at the University and supporting the Pathways to Birmingham Outreach programme.'

A family of footballers

'My father was a professional footballer before also becoming a doctor. My son Matt has eclipsed us both, scoring twice for Oldham Athletic to help knock out Liverpool in the FA Cup in January 2013, and also netting against Everton in the next round. He has played for Leeds United, Bristol City, Queens Park Rangers, Millwall and Salford City. I'm so proud of him.'

'My father advised myself and Matt to follow our dreams and I want to be able to offer other people the same chance. I'm so glad to see more people from a range of different backgrounds getting into medicine these days; not just because their parents were doctors.

'When I came to Birmingham in 1977, it was the first year the University was admitting mature students; people who already had some life experience and now desperately wanted to do medicine. I studied alongside a former dentist, a trainee priest and a top pianist, each of whom had had a moment of inspiration and went on to become brilliant doctors.

'I'm making a gift in my will to support students to become doctors at Birmingham, and to help researchers make the discoveries we rely on every day as doctors. As you go on in life, you reflect on why you are here today, and for me it is very much due to Birmingham Medical School.'

Want to explore the difference a gift in your will could make for students and vital research? Visit the University website.