Old Joe: Did you know?

Since 1908, the Joseph Chamberlain Memorial Clock Tower, fondly called Old Joe, has been an iconic part of campus but did you know the following… 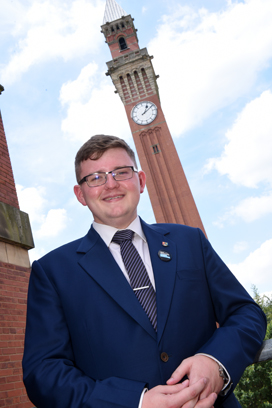 The University’s much-loved clock tower has many fans. Alumnus and member of staff Joseph McDowell’s (BA Political Science, 2015) passion for the history of the University started as a student ambassador when he would give tours of campus. Joe shares his Old Joe highlights:

‘The campus is steeped in history, every brick has a story and I am proud to be part of it. It’s a civic university, built for the city and that ethos is still here. I’ve seen Old Joe almost every day for the last six years and so I’ve always been interested in finding out more.’

‘Old Joe was made possible thanks to philanthropy. Thomas Rowbotham, a builder who is one of the people responsible for bringing the red brick to campus and whose firm built the Aston Webb complex, wanted to support it personally. He gave a gift that went towards the bells, face of the clock tower and hands – both made from single pieces of copper. His bells still chime today. His son Samuel would also go on to give the University its first legacy, which is why the Rowbotham Fellowship group of legacy supporters is named in his honour.’

More than a pretty clock face

‘The clock tower was originally designed with the physics department in mind to help experiments. Sir Mark Oliphant and his team used the tower in the 1940s to test his equipment which would form the basis of RADAR technology in World War II. It also provided useful as a watchtower during the World Wars.’

‘I’m always learning new things about the clock tower and I think he is so well loved because he is useful and a unique icon. He connects us to every other graduate of Birmingham who walked in his shadow. He’s a shared part of our history.’

Send in your memories of Old Joe to alumnicommunications@contacts.bham.ac.uk and our favourite five will win an Old Joe fridge magnet. The closing date for the competition is 31 January 2019.

Campus fell silent without the bongs of Old Joe when he stopped ticking for a few months this spring. The clock tower had to wait to be repaired by specialist company Smith of Derby (through their regional company JB Joyce & Co) who have serviced the clock and bell equipment since it was installed.

The clock main barrel mechanism and the large hammer on the tenor strike bell both had faults and had to be removed. Due to their size, it took two people to move them and they were then taken to be repaired in the Derby work shop. As Old Joe is a unique design, if any parts need to be replaced they have to be specially manufactured, as there are no standard parts.

Dan Watkins, Deputy Head of Maintenance at the University says: ‘As Old Joe is so special to us all, we carry out weekly inspections and routine maintenance tasks.

‘This is to ensure that not only do we identify and rectify faults in an efficient way, but we also manage the other services within the structure effectively and of course, we provide the best possible environment for our resident falcons.’

Many passionate Old Joe fans showed their support on social media while they waited for it to be repaired. A member of Team UoB even ran the Great Birmingham 10K with #Bringbackthebongs written on their t-shirt.