The 96-year-old tells Old Joe about his memories of being a wartime student and his distinguished military career. 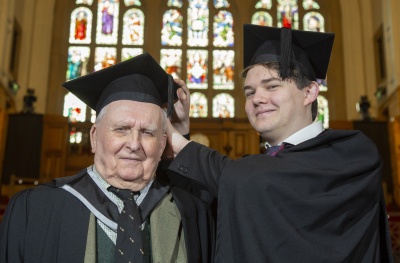 I didn’t expect to come back to Birmingham and be welcomed in the wonderful way I have been. I received my degree in absentia while I was fighting in Burma and was so proud to see Stephen graduate. Studying here was two years of my life that I shall never forget and I met some lovely people.

Campus has changed. When I was here it was really just the Aston Webb Building, where us engineers were based. It’s much easier to get lost now. I do remember playing rugby on a Saturday afternoon and girls teaching me to dance at the Hop in the Student Union (now the Guild) afterwards.

Cycling long distances is another memory from my student days. I used to ride my bike home from campus home to Hertfordshire and even to Cornwall, where I worked in a tin mine during vacations. All Mining students had to work in mines to gain experience.

I was a naughty student. I remember a group of us engineers were all fined £1 by the Vice-Chancellor after the police caught us stealing the beacons from the top of the lights at zebra crossings. We also put a dinghy on the top of the King George statue outside the Barber Institute (pictured). 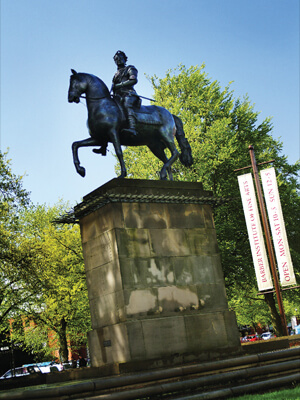 We pulled bodies from the rubble after the Coventry Blitz. A group of us caught the bus and went over to help. I also used to fire watch from the top of the Old Joe clock tower. Our job was to report on the site of fires across the city.

The white feather I was given by a woman in The Swan pub in Harborne was a symbol of cowardice. Mining was a reserved occupation during World War II so those in the industry were not ‘called up’, but I gave up my studies and volunteered to serve in the Royal Engineers, where I stayed for 31 years.

A watch saved my life by deflecting a bullet away from an artery in my arm. I won the Military Cross for bravery during that crossing of the Irrawaddy River in Burma on February 14, 1945, and for several days’ reconnaissance behind enemy lines. But I was most scared during the Battle of the Admin Box in 1944 when the Japanese forces overran our headquarters.

I protest for what I believe in. In June 2018, I led the 100,000-strong People’s Vote march calling for a second referendum against leaving the European Union in my wheelchair.

Watching birds from my office window, was a fantastic way to end my career. I was Controller at the Slimbridge Wildfowl and Wetlands Trust for 14 years and it was a wonderful pleasure to work with the scientists there.

Are you part of a family of Birmingham graduates with an interesting story to tell? Email the alumni communications team and let us know. We’d love to hear from you.

'Grandpa receiving his degree certificate at my graduation was a cool generational thing. It's been wonderful to share my experiences of studying at the University with him and he has many interesting stories to tell.'