I was given this flag by the Maoist party High Command after a ceremony to hand over three other sets of flags to the Government of Nepal during the peace process in 2009. It is one of a pair, and in the interests of neutrality, I also have a Nepali national flag hanging in my office! 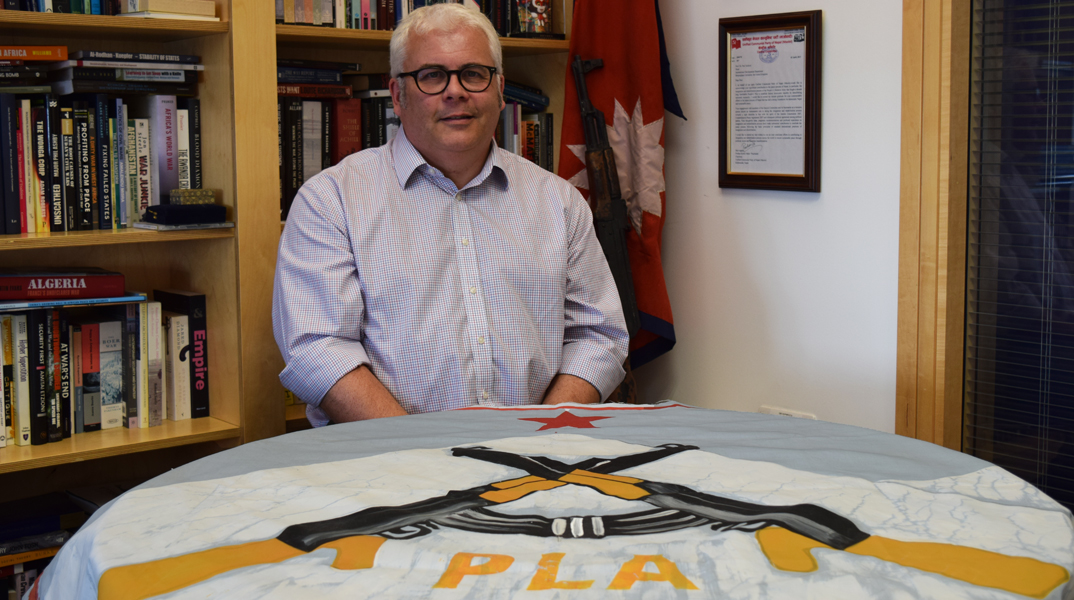 This pair of flags is one of a set of four that were paraded at the cantonment of Chitwan by a Maoist brigade, as control of the Maoist army was handed away from the Party itself to the official government of Nepal. As such it was a hugely symbolic moment and one of the key moments of the peace process, as a militarised group of fighters officially gave up being a threat to the stability of Nepal and gave itself over to democratic control by the Government. By this time, the Maoist Party had also reinvented itself away from a military leadership and into a successful democratic party, which in itself is unusual in the post-conflict world. Indeed, the Maoists had been so successful that since the war they have had three Prime Ministers.

The ceremony at Chitwan was a big affair with several foreign dignitaries as well as senior Nepali politicians. At this time I was the adviser to a technical committee of the Nepali Parliament advising on the demobilisation of the Maoist army and their transition to civilian life. At Chitwan I was also treated as one of the committee, being ushered in to the Nepali tent rather than the tent reserved for foreigners. I had, in fact, spent much of my time explaining the meaning of the language used by the international community, and what they meant by a series of technical approaches that they had failed to explain to the Nepalis going through the process. I was in a position of trust as someone who could explain the core issues to the Nepal political parties, the military and the police without prejudice. As a neutral, or at least, impartial, academic, the Nepalis trusted me to provide an honest answer.

This trust and the friendships I still have in Nepal are partly represented by this flag. At Chitwan, when they presented the sets of flags to the Nepali Government, they also presented me with a set as a token of friendship, so it hangs, in a position of honour, in my office.