The first set of research findings from the UK's biggest investigation into the effects of climate change on trees suggests that they will increase their rate of photosynthesis in line with an increase in carbon dioxide. The findings could buy us a few more years to combat climate change.

A unique facility in the northern hemisphere, the BIFoR FACE experiment pumps raised levels of carbon dioxide (CO2) into areas of woodland to replicate expected conditions in 2050 due to climate change.

The recent research findings, published in Tree Physiology, show that the oaks consistently raised their rate of photosynthesis by around 30 per cent – almost the same increase as the CO2 being supplied to them.

12 hours a day in the treetops

The research was led by former Access to Birmingham scholar Anna Gardner (BSc Zoology, 2014), who went on to study her PhD at Birmingham, funded by The John Horseman Trust.

Anna would spend her entire day – up to 12 or 13 hours – in a hoist 25m up in the tree canopy of the BIFoR facility in the Staffordshire countryside, collecting data from hundreds of individual leaves on trees.

She says: 'To be able to understand how the forest is functioning, and how that might be affected by climate change, you need to follow all the stages of the carbon cycle, water cycle and nutrient cycles that happen in a forest.

'We can then find out where the extra carbon is going: is it going into the tree trunk, or the root system, or the soil? We follow the carbon story and figure out the functioning of the whole forest.'

Carbon uptake is only one part of the story, and what the forest does in relation to carbon storage is also being studied, as well as how the change to the carbon cycle affects the rest of the forest ecosystem.

None of this research would have been possible if Anna had not received an Access to Birmingham (A2B) scholarship from the University. A2B scholarships, now part of the Pathways to Birmingham programme, are almost entirely funded by gifts from alumni.

She is the first member of her family to go to university, something that she acknowledges was not expected growing up.

'My family were hesitant about me going to university because of the financial cost,' she explains. 'My parents are motorbike mechanics and run their own business, and I guess they might have been hoping I would join the family firm in some way. 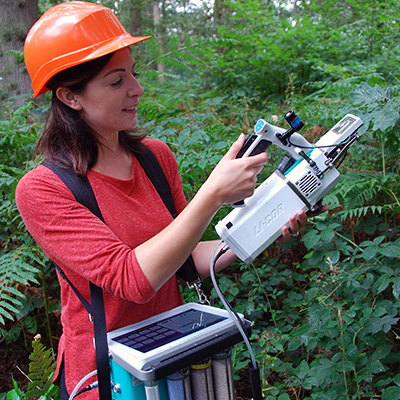 'But growing up and watching David Attenborough in Planet Earth kick-started my interest in zoology. I immediately decided Birmingham was the place for me when I attended an open day and looked around the labs and the green space in the middle of campus. I have a firm memory of being impressed by the Aston Webb building.

'To be able to get the A2B scholarship was absolutely fantastic, and I wouldn't have gone to university without it.'

Anna is now writing up her thesis (her PhD was funded by The John Horseman Trust) and intends to keep working on the environment and climate change. She has encouraging words for anyone thinking of going into higher education, and says: 'University can provide so many doors of opportunity. The best thing you can do is to take every opportunity that comes your way to achieve your dreams and goals.'

Passionate about our environment or helping young people get to university? Find out how you can make a difference.

The Birmingham Institute of Forest Research (BIFoR) aims to provide fundamental science, social science and cultural research of direct relevance to forested landscapes anywhere in the world. The team makes the evidence-based case for forests as part of one-planet living. BIFoR was formed in 2014 as a direct result of a £15 million philanthropic donation that was match-funded by the University.