How to win a Nobel Prize

After a trio of new Nobel Prize winners with Birmingham were announced in 2016, Old Joe reveals that all you need is a broom to explain a ground-breaking scientific discovery...

The University community was delighted when three new Nobel Prize winners joined the list of eminent University academics and alumni named as Nobel Laureates in 2016, bringing our total up to 11.

Professor Jon Preece (PhD Chemistry, 1995; UG Cert Counselling Skills, 2007), current Head of the School of Chemistry and Professor of Nanoscale Chemistry believes the impact of the awards on the University will be felt for years to come.

Jon was part of the PhD group taught by Professor Sir J Fraser Stoddart when the world-renowned scientist was working at Birmingham. Sir Fraser’s research on the design and synthesis of molecular machines – when he himself was Head of the School – was recognised by the Nobel Committee, alongside Jean-Pierre Sauvage and Bernard L Feringa.

Says Jon: 'The Nobel Prize means Birmingham is now well and truly on the map. In Chemistry, I believe we’re up something like 10 per cent on applications from 2015-16 and the information we have suggests the award is one of the significant factors in that growth.'

The Chemistry prize recognises Sir Fraser’s lifetime of work on the design and synthesis of machines on a molecular scale. His development of a new structure for molecules enables them to exist in two chemical states – a parallel to the way a transistor stores and processes information.

As these molecules are several magnitudes smaller than transistors in current computers, the potential exists to create machines much smaller than a human hair. Another potential application is as a tiny valve for releasing molecules from a capsule, e.g. as a release mechanism for drugs.

Molecular machines and nanotechnology are areas of huge significance, and the work that Sir Fraser began at Birmingham continues today in the University’s Schools of Chemistry and Physics.

But Sir Fraser’s legacy at the University extends beyond that of the prestige of a Nobel Prize, with Jon pointing to the 74-year-old’s introduction of a collegiate structure to the School, as well as the creation of a supramolecular and nanoscale chemistry research unit.

Over the course of Sir Fraser’s 50-year career, more than 500 PhD and postdoctoral students have been trained in his laboratories, with 100 (including Jon) going on to independent academic careers.

Jon is extremely grateful to Sir Fraser for providing the inspiration for his own career path. When they met at Birmingham for Jon’s PhD interview, the two immediately connected: 'I was just blown away by his vision and the sort of things he was telling me about. It caught my imagination and there was no other supervisor for me then,' Jon says.

'Even before I was doing my PhD, he was cited as one of the top chemists in the world and being tipped as a future Nobel Prize winner. So for more than 25 years he’s been regarded as one of the leaders in his field, particularly creative chemistry – he makes machines out of molecules; it just fires people’s imaginations.

'I think the award shows that the University’s investment in individuals does pay off. When he came to Birmingham he was given one of the largest start-up packages for a chemist – if not for a scientist – that had been offered in the UK up to that time, and it has proven a wise investment.'

Professor David Thouless was a Professor of Mathematical Physics at the University from 1965-78. Professor Mike Kosterlitz was a Research Fellow under Professor Thouless in 1970 and subsequently a lecturer from 1974-82. With Professor Duncan Haldane of Princeton University, their research made significant steps forward in the discoveries of the properties of matter, which may pave the way for revolutionary technologies such as quantum computers. 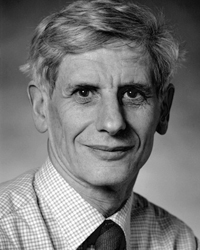