She successfully managed its merger with Birmingham Women’s Hospital earlier in the year, and is proud to have achieved a partnership that is the first healthcare trust of its kind in Europe.

The focus of Sarah-Jane’s role is making the hospital a great place to work for its 6,000 staff. 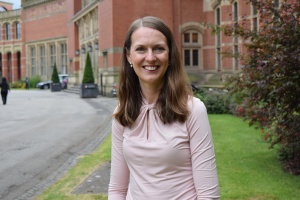 ‘Organisations don’t have two cultures so if we’ve got happy staff who are working well together we’re going to get happy patients,’ she says.  ‘I want families who come here to be confident that they’re receiving some of the very best care in the world.’

Sarah-Jane is also chair of the NHS England Maternity Transformation Programme, and is working hard to make maternity care safer, including additional support for women with mental health issues.

She describes her role as ‘the most amazing job on the planet.’

‘It comes with its challenges as you have to make difficult decisions, but it allows you to make a difference every single day,’ she adds.

Other honorary graduands were:
‭