Hands off the wheel

'In the UK, 75% of families own a car, and as a population we drive over 244 billion miles a year. In the near future, how we travel those miles will change dramatically. Increasingly, autonomous systems technology will control our vehicles, with intelligent automation making driving safer, more efficient and more predictable.

The concept of cars that could drive without human input first reached international prominence through the DARPA Grand Challenges from 2004 to 2007, with autonomous vehicles completing 132 miles in the desert and then 60 miles in an urban environment. Although not without incident, these events demonstrated that localisation and navigation technologies from pioneering mobile robots like Rhino and Minerva could be transferred into the domain of outdoor vehicles. One of the key researchers on those robots, Sebastian Thrun, went on to head the leading teams in the first DARPA Grand Challenges, before joining Google to help them build the first driverless cars.

The Midlands is a very active area in autonomous vehicles. The University of Birmingham has world leading research into automotive radar and intelligent autonomous capabilities, both of which are increasingly important for automotive applications. Jaguar Land Rover and Tata Motors are both leading their research and development into connected and autonomous vehicle technology in the region. The School of Computer Science is taking their research on planning for autonomous robot behaviour under uncertainty and transferring this to autonomous vehicles. Working with local start-up Inventive Cogs they are producing technology which creates journey plans for single vehicles and vehicle fleets that take into account the predictable dynamics (e.g. rush hour, accidents) of the journeys we undertake everyday.

Although the term "driverless car" is a popular name for autonomous vehicles, it represents just one point on a broader spectrum of vehicle capabilities. To support legislation and planning, the Society of Automotive Engineers (SAE) has defined six levels of automation. These range from traditional driving, up to full automation requiring no driver (i.e. a true driverless car). 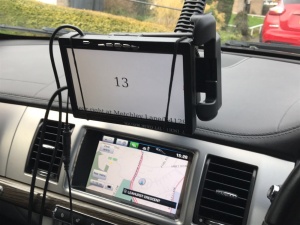 At lower levels the human must monitor the environment at all times as part of limited control system. This includes reasonably common technology such as adaptive cruise control. The latter level includes the current industry leader Tesla's autopilot system which can autonomously steer and accelerate under a range of conditions (over 20kph, where good road markings are visible).

When moving across levels an important switch occurs over who is responsible for the car. Defining where the insurance liability will switch from the driver to the manufacturer is important.

The miles we all drive in ten years’ time will feature a lot more automation than those in 2017. The increased safety and comfort of these miles will be driven by the developments being made in Artificial Intelligence and robotics today. And the changes in behaviours and business models these technologies support will show that Uber's first use of autonomous taxis is just the tip of an autonomous, revolutionary, iceberg.'

*The top picture is of Computer Science students David Clegg and James Kelly looking at performance data at the end of a test run.

Autonomous journey planning software designed at the University will know before you do that a traffic jam is building, and decide whether it’s worth diverting or not.

More widely, the University has also...

Intelligent Robotics Lab at the University of Birmingham

Uber's first use of autonomous taxis